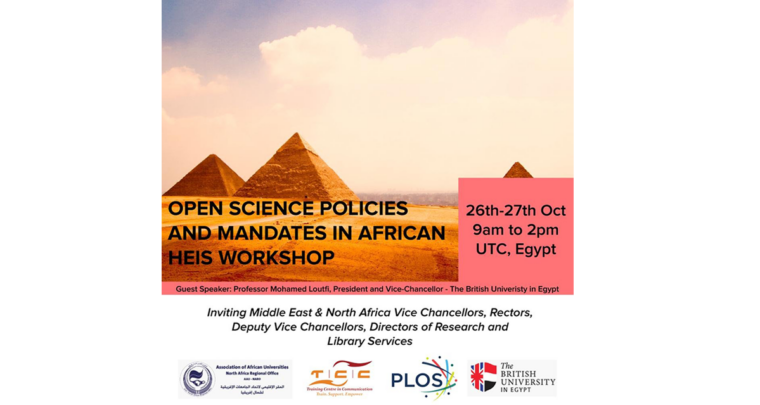 The Open Science movement as has been defined by UNESCO, is as a movement aiming to make science more open, accessible, efficient, democratic, and transparent. The transition to Open Science and its adoption calls for open and active multi-stakeholder dialogue and encouragement of policy environments that support effective operationalization of Open Science in institutions and at the national and regional level. To this effect Association of African Universities (AAU), Public Library of Science (PLOS) and Training Centre in Communication (TCC Africa), The British University in Egypt (BUE), and supporting partner The United Nations Educational, Scientific and Cultural Organization (UNESCO), converged for a second workshop, advocating for the Adoption and Implementation of Open Science and Open Access practices in member institutions of the AAU, addressing barriers and challenges to this, with the desired outcome being engagement and buy-in by the academic community on the adoption of Open Science.

The workshop is the second of a four part regional series of blended Open Science Workshops supporting Presidents, Rectors, Vice-Chancellors, Deputy Vice Chancellors, Directors of Research and Directors of Library Services in African Universities in Creating and Implementing Open Access and Open Science policies and mandates in their respective institutions.  These regional workshops follow the initial meeting held in April, which convened African higher education stakeholders across the continent to discuss open science and open access in their respective member academic communities.

“The British University of Egypt is equally supportive of Open Science initiatives and its implementation on all levels; the global macro-level, the university micro- level and the international level and is ready to embrace and promote the practice of making knowledge accessible to all who seek for that knowledge with a focus on Africa”, says Prof Yehia Bahei El-Din, Vice President for Research and Enterprise, the British University in Egypt (BUE)

In UNESCO’s point of view, as presented by Ana Persic, the Programme Specialist for Science Technology and Innovation Policy at UNESCO, Open Science has the potential of being a true game changer in bridging the science, technology and innovation gaps between and within countries and fullfiling the human right to science. It is increasingly recognized as a critical SDG accelerator.

The Public Library of Science (PLOS) has been instrumental in catalyzing change by supporting the advocacy and awareness of Open Science in Africa through this collaboration. “We at PLOS are continuously working to identify new routes to equitable participation and hope to co-create pathways to Open Science and develop solutions that work for diverse communities rather than assume a one-size fits all approach,” remarks Roheena Anand, Executive Director of Global Publishing Development, PLOS.

Founded in 2006, Training Centre in Communication (TCC Africa) has been invested in an Open future by creation of training content in scholarly communication aimed at increasing the value of research outputs, encouraging the uptake of open access, and strategic collaborations with partners at local, regional and international level aligned at improving the accessibility and visibility of African research outputs.

The subsequent workshops following the workshops at University of Dar-es- Salaam, Tanzania and the British University in Egypt, will be held in South Africa in partnership with the University of Cape Town in January 2023, and the final one will be in Ghana, hosted by the Association of African Universities in April 2023.

About the British University in Egypt (BUE)

The British University in Egypt (BUE) is a private Egyptian university in Al Shorouk City, Cairo, Egypt. Founded in September 2005, through an inter-governmental agreement, the university provides a British style of education and awards degrees validated by its partner UK universities and the Egyptian Supreme Council of Universities. According to the Center for World university ranking(CWUR), the BUE was ranked in 2020 among the top 10 universities in Egypt.

About the Association for African Universities (AAU)

Founded in Rabat, Morocco on November 12, 1967, The Association of African Universities (AAU) is an NGO based in Accra, Ghana. The mission is “to enhance the quality and relevance of higher education in Africa and strengthen its contribution to Africa’s development”. While serving as the “voice of higher education” on the continent. With over 400 member institutions across Africa, AAU provides a forum for cooperation and exchange of information on higher education and research policies, creating spaces for research, reflection, consultation, debates, co-operation, and collaboration on issues pertaining to higher education.

About the Public Library of Science (PLOS)

About the Training Centre in Communication Africa (TCC Africa)

The Training Centre in Communication (TCC Africa) is the first African-based training center to teach effective communication skills to scientists. TCC Africa is an award-winning Trust, established as a non-profit entity in 2006 and registered in Kenya.  TCC Africa provides capacity support in improving researchers’ output and visibility through training in scholarly and science communication.