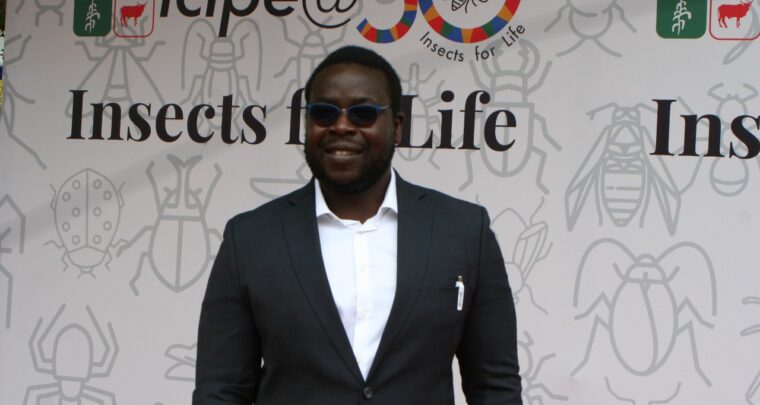 In the footsteps of my father, the entomologist.

Saliou Niassy is a Senegalese national, holder of a BSc and MSc in Natural Sciences, a Postgraduate degree in Zoology. He is a DAAD-ARPPIS PhD Alumni, in a joint programme between ICIPE and Jomo Kenyatta University of Agriculture and Technology (JKUAT) and  a former 2008 TCC Africa trainee.

Saliou was AfroMont’s Coordinator a Research Network on Global Change in African Mountains. He also worked as Research Scientist, Head of the Technology Transfer Unit at ICIPE, with a keen interest in Food Security and Poverty Alleviation in Africa. Author of several scientific articles. He is also the current Secretary of the African Association of Insect Scientists AAIS .

TCC  Africa :Tell us about your academic career
I left my country Senegal back in 2008 to pursue PhD degree at the International Centre of Insect Physiology and Ecology icipe under the African Regional Programme in Insect Science (ARPPIS). After my PhD, I joined the University of Pretoria in  South Africa for about two years before returning to where I am.

I once benefitted from the Training Centre in Communication (TCC) training at the University of Nairobi in 2008 when I was a PhD student without much experience in science communication. In the short but intense training, we covered communication concepts such as developing posters and how to make a presentation among others, concepts that I have often used in my career. Having come from a Francophone country, the training made things easier for me, and I even recommended some of my colleagues with a similar background to attend.
TCC  Africa : Why Insect Science
I have to admit that it might have to do with my father, an entomologist and an ICIPE and ARPPIS alumni. He got his BSc and MSc in entomology and was one of the leads in charge of desert locust control back in Senegal. We used to live at the Crop Protection Directorate in the suburbs of Dakar. My father was the head of the entomology lab, and so throughout my childhood, I had always been around insects and insect books and played around in his lab, feeding the insect colonies. We would also watch trucks going to spray the desert locust. I consider these my first encounters with insect science.
Later I tried to quit the field but was lucky enough to have gotten into the ARPPIS fellowship program after three failed attempts. This was through the African Association of African Association of Insect Scientists (AAIS) organized in Senegal. There I had met ICIPE student who guided me through the application process.

I believe that insect science is the future and very soon being an Insect scientist will be mainstream discipline for young people in the coming years. The survival of humanity will require a better understanding of insects.

TCC  Africa :You mentioned that you got interested in insects as food about eight years ago. Why are you so keen on that? Were you looking at it from the perspective of African traditional culinary cuisine since some communities supplement their protein with insects in the region, especially in Eastern and Central Africa?
Insect for food, a practice scientifically referred to as entomophagy is more common in Africa than anywhere else in the world. I can recall that when I was a kid during rainy seasons, my mother told me that back home in the village, people used to collect the flying termites and fry them to eat. However, as the generations change so has the perception and attitudes towards insect consumption. The younger generation has been raised mainly on modern conventional food; thus, it can be hard to convince them to embrace insects as food. There has been a lot of research on the use of insects as food and feed in Africa and the reasons and the lack of recognition despite a rich diversity. Some of the reasons are that their benefits are often overlooked in modern agriculture. Insects are not only good for the health of the environment but also sustainable. Given their potential for mass production, little utilization of land space and production of less greenhouse gases, insects could help address the challenge of food security in Africa.

TCC  Africa :What is happening is creating awareness on the importance of how to harness and consume insects safely without having to rely on the seasonal harvest. Would you say this is your research focus?

As you may be aware, ICIPE was awarded the prestigious Food Planet Prize for pioneering research and development activities on insects for food, feed, and other uses in terms of research in this discipline. We are still exploring insect species’ diversity to reshape the food, agriculture, waste management and environment, pharmaceutical and cosmetic ecosystems. For instance, we have established approaches that focus on cost-effective mass rearing of insects that are not dependent on seasons and extraction of insect oils superior for their nutrients.
This area of research is very broad, with a lot more to discover. We also did an analysis of desert locust for food. In Sudan and other African countries, they have been consuming desert locusts as food for more than decades, so why not embrace this as a food alternative. As an institution, we must own this science as it is indigenous knowledge.

TCC  Africa :: How are you able to manage the regulations in the added value chain system?
Recently, Kenya has opened its doors for entrepreneurship in insect for food and feed through the Kenya Bureau of Standards (KEBS). So we have standards that regulate insect use as long as you follow the guidelines of use provided and certified.

TCC  Africa : Speaking of desert locusts, for the past two years, we have had the desert locust invasion in Kenya and other different parts of Africa. Is this seasonal? How is this being managed, and how will we manage the next attack based on the lessons learnt?
I have to mention that ICIPE is part of the institutional, technical team established by the Ministry of Agriculture. As an international research organization, our research aims to provide solutions for managing this insect by understanding insect physiology and ecology. There have been various collaborative efforts by regional and inter-regional bodies to combat the desert locusts, some with longer experiences than others.
icipe’s founder, Prof Dr Thomas Odhiambo, did his PhD on desert locust and published several papers. Aside from that, ICIPE was also part of the team that developed the biopesticide called Green Muscle currently being used to control the desert locust.
The biopesticide is based on an isolate of Metarhizium acridum fungus used on the insects at the hopper stage. When they are infected, they infect each other since they always band together.

ICIPE also discovered and patented the pheromones responsible for the transformation of desert locust into a gregarious form. Desert locust in the solitary form is harmless but change gregarious when they turn yellow. There are behaviour-modifying compounds which ICIPE has characterized, synthesized and tested. The pheromone, phenyl acetonitrile (PAN), can be used together with biopesticides to disrupt the swarms.

Loss connected with desert locust is huge; thus, I think it is important to predict and manage them. The systems and tools for prediction are set to be able to manage them.

TCC  Africa : This has been an amazing journey for you. You have found yourself doing more or less the same research as your father did. Would you say that you are following in his footsteps?
I have explored Africa and been exposed to several cultures. I have to credit my father for what I am today; there is no doubt about it. If he were not an entomologist, I probably would not be either. On the other hand, icipe is highly competitive, and it takes both passion and professionalism to work there. I did not understand the science of insects properly until I came to icipe. I nurtured my interest in entomology and developed my path through the mentorship of my supervisors and colleagues that I met.

TCC  Africa :What are the challenges you’ve gone through?
I think the main challenge has been to convey the message of the importance of insects to masses. It is not a mainstream topic in Africa, and every time I try to talk about insects to nonscientists, they may find it boring. I think the founder of ICIPE is a visionary. He made it viable for Africans to see that if we join our intelligence and efforts in an area, e.g. Insects, we can bring all the talents together from all over the continent despite differences that we may have among Africans. A concept that brings people of different cultures together to prioritize and contemplate on issues together.
Also, we need our policymakers to acknowledge the importance of and allocate resources to this field which is so essential to humans and the environment.